Well, I’m kinda over blogging on my own blog in general but I’m going to write this one anyway. It’s my, “WTF was I thinking last year?” blog post. Basically, I’m just going to talk about all the stupid crap I did last year and then promise to try to do better this next year. 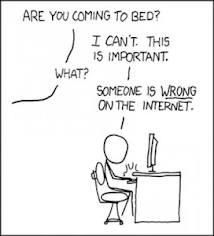 1) Internet fights and generally being a dumbass
Ok, this is the biggest and most on my mind and that’s why it’s first…. I’ve only gotten into internet fights with a VERY few people (like, less than 5). In the end, they were dumb, I feel dumber, and I feel bad about myself as a person. I also feel bad about anyone I made feel bad. Sorry about that, if I see you around in person, I owe you all a couple of beers (or whatever you’re drinking/eating) and/or at the very least, an apology in person for sure. Of course, none of you have to forgive me or be my buddy or anything crazy like that, just know that I plan to try to not be such an asshat in the future.

So, this next year, I’m just going to do my best to let it go when something that irritates me on the Internet happens. People do what they do based on their own experiences and it’s not my place to judge them especially when I have no idea what their experiences are in the world. So yea… No more Internet fights. Let’s just go back to having some drinks and hanging out, making things awesome, and living our lives.

2) Hating and Hating Haters who Hate
I kinda slipped into becoming this and living in this area of the world a little bit towards the end of this year. I let things get to me that shouldn’t have gotten to me because, honestly… Well, in the end it doesn’t matter at all.

3) Being a better manager/librarian in my job
Honestly, this year has been rough for me personally and as a consequence of that I haven’t done as good of a job in my job as I would have liked. There are a bunch of things that I failed at for all kinds of reasons. I failed at looking at the details of some projects and I didn’t motivate my staff as much as I wanted to. To put it plain and simply, I didn’t do an awesome job like my amazing staff deserves.

So, in case you don’t know…. I’m a branch manager in charge of two branches in my library system. I easily have a better staff than just about any manager I have ever talked to. I never have to worry about my libraries and they just kinda do an amazing job all the time and they make me look good. What more could I ask for? They are the reason that I have been able to go to all these conferences and do the things that I do outside of my library branches. I should do better for them and that’s my plan in the next years going forward. I’ll start by publicly saying thank you!

4) Organize
Right this second, I am terribly organized. I have a disturbingly messy office with parts of projects scattered around and things stored all over it. Basically, it’s a disaster and I’m not sure how I got to this point but this next year, I’m going to take some time and figure out how to be better organized not just in my office, but in my whole life. Ugh… this one will take a LOT of work…. 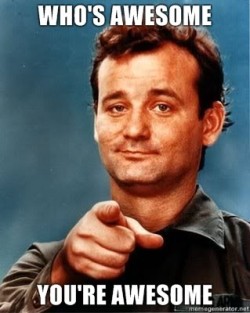 5) Do Something Awesome
Ok, as a guy who honestly has a lot of privilege in the world, I feel like its my responsibility to not just sit on the winning lottery ticket but do something meaningful and good and awesome with it. Of course, I’m not sure what I should do just yet. So for now, I hope to just try to suck a lot less as a person and see what that does. I’m totally open for suggestions if you have them though.

6) Follow Through
There are a couple of things that I failed at following through on this last year. There were a couple of promises I made that I didn’t keep, or didn’t get to in time, or that let people down in the professional world. If you were one of them, I’m sorry about that. This is going to go back to numbers 3 and 4 and 5 but anyway, I’m going to do a much better job and following through on my professional promises…. Umm…. I promise?

Well… Dang… OK, there are like ten more things to talk about but I feel like you’re done reading and I’m kinda done writing another blog post. See you next year.

One thought on “WTF Was I Thinking Last Year?”