So this is my latest project and I’m really excited about it. Excited enough to blog! Which is something I haven’t done very often the last couple of months. But, anyway… We are going to be building a book bike for my library and I’m far more excited about our process for building it, than the actual bike itself. Let me tell you all the details.

1) Genesis
I’ve seen a bunch of book bikes in other library systems and they seemed like a really amazing idea. I was especially excited because in the community of one of the branches that I manage it would work out perfectly. You see, our bookmobile is too big to get down some of our streets, our community is only 3-4 square miles large, and its really really flat. There are also about a dozen charter schools in the area and small places that only need something for an hour or so and not long enough to necessitate an entire visit from the book mobile. There are also a bunch of small fairs and festivals and parades that happen in the area that the bookmobile is unavailable for. The bookBike would be perfect.

2) 99 Problems but a Boobike Ain’t one
I had been trying to find someone to build us one for a while but ran into some problems. I called quite a few custom bike builders and never heard back and from others I got some outrageous prices. There are a bunch of custom, kind of fun digital things I want to incorporate into the bike like Jason Griffey’s Library Box, wifi, usb ports, solar panels to power it all, and a bunch of other ideas. Because of all of that, and the complexity of the project, I kinda just put it on hold for a while. 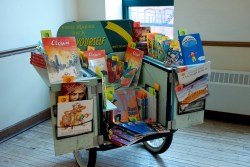 3) Solutions are Always Good
A couple of months ago, I went on a tour of Techshop San Jose organized by Paul Sims and Ann Awakuni and then I organized a tour for just my library system. At our tour I met the manager of the shop and one of my staff started talking to him about a bunch of different projects (secret projects that I’ll tell you about later). We started talking about the BookBike idea. The manager said something to the effect of building it there. That discussion led to an idea of having our community come and build the bike! Two of my staff members were so enthused about this whole thing that they went and took some metal working and welding classes and are now the real leaders behind this project.

4) The Moderately Well Thought-Out Plan
We thought, what if we taught the community members to build the bookbike? Tech Shop has all of the tools, another organization unofficially (I’ll tell you who when its official) has said they’d be interested in donating materials, and we’d just need to pay for short memberships and classes from Tech Shop to cover their expenses. By doing this, the community members would learn to weld, solder, work with lasers, and learn a bunch of other skills and tools and we’d get a bookbike for free! It was a win, win, win!

5)The Execution of a Fail and a Win
Here’s where there is a slight fail and a slight win. About two months ago we put together some flyers, about two weeks ago we sent out a bunch of press releases, it was on our website, on our social media, we used the #maykermonday program as a kickoff point, we talked to a bunch of people, and just about everything else we could think of.

Well, only one person showed up. But it turns out that he was an architecture major, recent grad, and his thesis project was designing a library! He seems to be really excited about the project and we have three staff of mine, plus two of techshop, and he wants to get a couple of his buddies involved. In the end, I think this will be a really great project for our library and we’ve already thought of some other ways we can make some future ones even bigger and better! I’ll let you know how it goes.